OddsMatrix has achieved a new milestone, reaching €1bn turnover for the year. 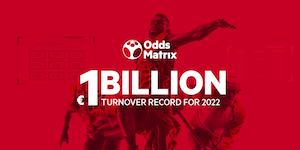 In 2021, turnover finished just below €1bn, so to break that milestone in Q3 2022 is "a massive achievement," says the company. "Even more, turnover in both August and September was up by 100 per cent year on year."

This follows another OddsMatrix record which was announced at the beginning of the year when it surpassed the €100m turnover mark per month in Q4 2021.

Ebbe Groes, Group CEO of EveryMatrix, says: “Another stunning accomplishment for OddsMatrix and EveryMatrix as a whole. We’ll likely be hitting €200m turnover per month in Q4 2022. And the fast growth of volumes can be turned into even more feature investment, positively reinforcing the volume growth.”

2022 has been a great year so far for OddsMatrix, signing important deals with Intralot in Morocco for MDJS and the German brand bet-at-home. This year, EveryMatrix also acquired sports betting provider Leapbit to elevate its online-first OddsMatrix platform and expand its ecosystem with a mature retail product.