Fuelling the future of fun

With the successful launch of Embed’s Mobile Wallet firmly in its back pocket, InterGame’s Dan Snook speaks to the company’s chief technology officer Andy Welsh about not only how the contemporary payment solution is shaking up the industry, but about how the delivery of its services and updates to them are disrupting the status quo. 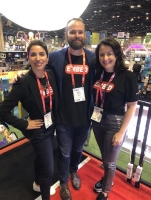 Out of home entertainment has been described by some as a “sunset industry”. Perhaps if it was still in the guise that it was, say, ten years ago, then I would agree. But, for me, the vibe is unmistakably changing. From the minor, like the almost complete absence of ties worn by men at the IAAPA Expo, to the major, the cutting edge products like Embed’s Mobile Wallet. If you’re still part of the “sunshine” generation, you’re going to get left behind.

Such a fate, however, is most certainly not going to be suffered by Welsh and his team at Embed.

The CTO is at the helm of a digital revolution that is turning heads in a previously somewhat conservative industry.

A sit down with Renee Welsh

We are always interested to hear the opinions of industry experts across the pay-to-play, land-based gaming, sports betting and iGaming sectors.

We are always interested to hear the opinions of industry experts across the pay-to-play, land-based gaming, sports betting and iGaming sectors.