Red Rake Gaming, the specialist casino games provider, has just released its latest game, a 6x10 reel video slot where the rows reveal themselves as the player gains wins. 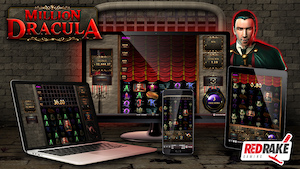 This new video slot adds more excitement by offering players up to a million different ways to win. To enter Dracula's castle, players will need to gradually lift the grate at the castle's entrance while getting wins at the same time.

Starting with 3x6 reels, the player will continue revealing rows until 6x10 is reached, when the grate will drop down again to show the three initial rows and then start rising again while granting further wins. Dracula is a wild symbol in this video slot and replaces all other symbols, except the bonus symbol.

The cups with the bonus symbol launch the free spins feature and take the player to a different area, Dracula's lair. Three cups grant eight free spins, four cups grant 12 free spins and both five and six cups grant 16 free spins. Four rows will be automatically revealed during this feature, with the rest remaining hidden behind a mysterious curtain that will rise gradually to reveal the rows two at a time while also granting the player wins.

Million Dracula was released for all Red Rake Gaming operators today and is also available on the new tournament tool launched recently by the well-known game developer.