Yggdrasil has partnered with Jade Rabbit Studio for a thrilling Egyptian adventure, Word of Thoth. 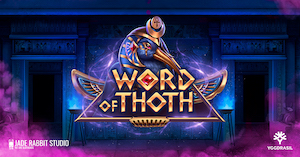 The 6x4 video slot contains 4,096 ways to win while every spin offer possibilities of cascading symbols for every winning combination. The free spins mode can be triggered in multiple ways, either by three or more scatters landing on the reels or if the meter above the reels fills up.

With five spots available, they are filled by either a tumbling win or a scatter being present on the reels, each of which will add to the count. The meter resets after every spin. During the bonus round, a minimum of 10 free spins are awarded, while the more the meter fills, the more multipliers and free spins are added, giving players the chance to enjoy huge wins.

In certain jurisdictions, players also have the opportunity to progress straight through to the free spins mode via the Bonus Buy feature.