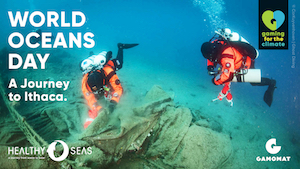 GAMOMAT Distribution launched its popular Book of Oasis game in December 2021 as part of its Gaming for the Climate initiative, donating a percentage of the revenue to Healthy Seas to support their work protecting the oceans around the world.

The first donation has already had an impact, allowing Healthy Seas to conduct a clean-up operation in the Mediterranean. For the past two weeks, volunteer divers in Ithaca, Greece, have been removing so-called ghost nets left on the seafloor by an abandoned fish farm.

And since each abandoned net seriously endangers the seaweed forests that play a key role in the marine ecosystem, the clean-up has helped prevent a potential environmental catastrophe.

Posidonia seaweed forests are home to thousands of sea creatures, providing food to sustain them and acting as an underwater nursery for their offspring.

Posidonia oceanica also produces oxygen while acting as a long-term store of carbon dioxide. What’s more, the seaweed is both slow-growing and has a long life span, which makes it particularly worthy of protection.

GAMOMAT Distribution will continue to support Healthy Seas’ work protecting the oceans through its Gaming for the Climate initiative.