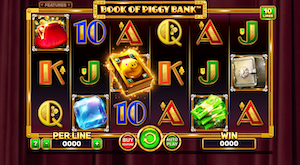 The release forms part of the developer’s Classics series and has a 6x3 reel configuration with 10 paylines.

Players are taken on a treasure hunt for cash and luxury, with stacks of cash, gold coins and money vaults among the symbols on display.

Meanwhile, a jazz soundtrack recreates the atmosphere of a Monte Carlo casino lobby.

There is a wild symbol which pays, operates as a scatter and triggers 10 free spins. During free games, a random symbol is chosen to act as an expanding symbol creating more winning opportunities. The maximum win is 10,000x.

Players can continue to seek Piggy’s riches as three or more scatter symbols trigger 10 free spins. At the start of each spin, a random symbol is chosen to expand and it appears in a window above the reels and changes on each spin.

After any win pays out in this phase, the chosen special symbol will expand to create new paylines where the symbol does not have to appear on consecutive reels. This feature can re-trigger adding another 10 free games.