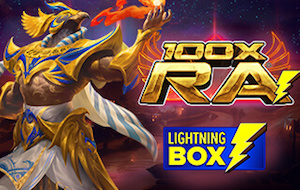 The Sydney-based studio’s history-themed game features a four-by-five-reel screen and tasks players with harnessing the power of the ancient deity to unlock huge prizes.

When three or four bonus symbols land on the reel matrix, seven free games at level one are triggered. In the free games, all wild Ra symbols act as multiplier to increase players' wins, boosting the cash prize between two and 10 times the original bet.

It doesn’t stop there though, as the ild Ra symbol can combine multipliers up to 100 times the bet. Th Level Up symbols will take players closer to winning 100xRa.

With 1,024 paylines, winning combinations can be found in any of the five reels and in this high volatility game players have got to spin big to win big.

100XRa will be exclusive to players at Gamesys Group over the next week before enjoying its network-wide release thereafter.