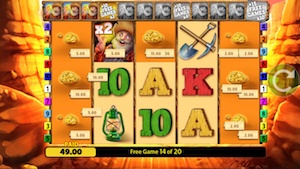 The leading slot developer has taken the popularity of Gold Frenzy, the classic Reel Time Gaming title and delivered further dynamite to the action thanks to its free games modifiers and the added possibility of huge wins from the configurable Jackpot King functionality.

As with the original, three or more explosive TNT Scatter symbols in view awards a minimum of 10 free games, with all Prospector symbols acting as a wild and collecting the cash value of every golden nugget that settles on the reels on the same spin.

With Gold Strike Bonanza, Blueprint has ramped up the bonus round by introducing increasing win multipliers and the chance to claim extra free games when at least four Prospector symbols are collected.

Should enough of the classically styled gold hunters appear, a x10 scatter multiplier activates every time he grabs the gold. Furthermore, newly-developed modifiers Gold Rush and Big Blast Bonanza can be randomly triggered to deliver even more gold to players.

With a toe-tapping banjo soundtrack and joyous audio from the treasure-frenzied prospector himself, Gold Strike Bonanza is another fresh take on a classic theme that once again demonstrates Blueprint’s proficiency in making the most out of game families for both operators and players.

The leading affiliate marketing platform Affilka by SOFTSWISS has broadened the capabilities of its commission constructor by adding the CPL commission model.

Xtremepush and Playtech in partnership

Xtremepush, the sports betting and player acquisition and retention platform, has partnered with Playtech, the world's largest supplier of online gaming and sports betting software.