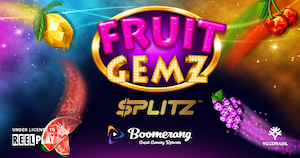 Paylines can expand up to a total of 19,773 in the five-reel game as Splitz symbols land, which split into up to four symbols.

Meanwhile, wilds, cash coins and collect symbols can also land at any given moment.

Shiny fruits fill the reels, with an upper reel adding an extra symbol onto the middle three columns. Fruit Gemz Splitz furthermore features a cascading wins feature, which sees all winning symbols removed and replaced on the reels.

The slot is the latest title by Boomerang, a ReelPlay partner, to be added to the YG Masters portfolio via a deal with ReelPlay.

When six or more coins land on a single spin, the Hold & Respin feature is triggered, awarding three spins.

Coins land on the reels with values of up to 10x, as well as three jackpot coins – mini, major, and mega – which can award up to 888x. Every winning spin resets the count back to three.

When a collect symbol appears, all coins are immediately awarded "for potential mammoth wins."