Yggdrasil and ReelPlay are travelling back to the land of King Arthur in Towering Pays Excalibur. 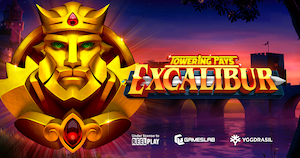 The five-reel, increasing paylines slot sees the Towering Pays mechanic return with King Arthur himself acting as a wild. If Excalibur stacked symbols are present across a winning combination, players will progress to the next stage, which sees the reel set expand, adding an extra row atop the grid, which continues until the grid is 5x8. Four separate forms of free spins are available - Lancelot, Merlin, Arthur and Camelot, all of which have increasing prize multipliers, extended spins through the presence of Excalibur and more modifiers for mammoth wins. Three feature wheels landing will activate the game’s four-level wheel feature, with a multitude of awards available including guaranteed win spins. The Avalon feature is triggered when Excalibur lands on each of the first three reels in the 5x8 grid, offering huge win potential on every spin. During base play, players can purchase a Quest Bet, enabling the opportunity of a hold and spin feature which can also trigger in the Bonus Game. In certain jurisdictions, players can also progress straight to the bonus round through the Buy Feature. Towering Pays Excalibur is the newest YG Masters release from Games Lab, who via their agreement with ReelPlay are able to provide standout content across the initiative.