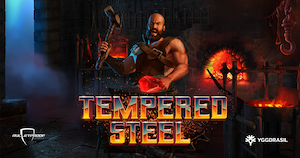 During base gameplay in this 5x3, 20-payline slot, the blacksmith acts as a wild, while at random points his tools may heat up and drop into the barrel, causing steam to rise and a random modifier appear.

This triggers either the Lock and Spin, Bonus Frenzy or Forge Your Weapon features. Lock and Spin will lock in any stacked wilds and a respin occurs. If any reel remains unlocked, an extra spin will be awarded.

The Bonus Frenzy feature adds more scatter symbols to the reels, increasing the chances of triggering the free spins. These are set on fire as they pass the reels.

Forge Your Weapon sees players smash through rock three times to reveal a weapon, which will appear stacked on the reels. If three or more bonus symbols land on the reels it will activate the free spins mode, where five forges are lit upon entering the mode.

On each spin, one or more of these forges may be activated, adding a wild to the reel above. Depending on how many scatters land, a corresponding number of wilds will be added to the reels for the duration of the feature.

Wilds will move up one step per spin in the bonus and once all forges have been extinguished and all wilds have moved out of the reel, the round ends. At the end of free spins, there is a chance that the forges will be relit and the bonus will continue.