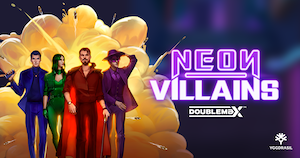 The new 3x5 video slot is based on a genius inventor who has found a way to “create riches on the reels.”

The game features two possible bonus rounds, the respins and the jackpots, as well as expanding reels which can assist in triggering either bonus mode. There is also a respin wild feature which adds random wilds to the screen for a lucrative single respin.

The jackpot feature can be triggered in three different ways, either through an instant jackpot reward in the base game, in a respin mode or if three scatters land on a single spin. During this round, players can pick from 12 hidden items to match three symbols for the corresponding jackpot. Respins can be triggered if five or more money symbols land on the reels on a single spin, giving players a grid array, which can grow up to 5x5 in size if the reels expand. This creates up to 60 paylines, which players will look to fill with symbols, which stick once they land.

For every successful spin, players are granted one extra spin. Each symbol has a cash value, giving players the chance to accumulate larger winning sums.