Pilotgames.com has announced its latest registered donations to several charities via the Jackpot Jungle and Jackpot Hunter games. 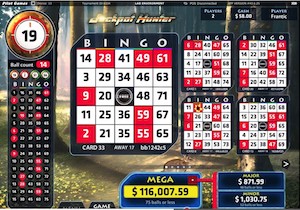 Pilot Games helps raise and donate funds via its creative and entertaining games which can be enjoyed by a group of friends or family during leisure visits to local licensed venues where Pilot Games are available.

Pilot Games at the same time announces the return of GameDay Bingo. While players can watch all of the NFL football action, they can also play along with Pilot's GameDay Bingo wide-area progressive.

Also, during the first and second quarters, Pilot wil host 100 PLAY Flash Bingo Tournament Games. Pilot's Flash Bingo is a high speed, two-player bingo. With Flash Bingo Tournaments, bingo card results for each of the 100 plays are converted to a point schedule and prizes are awarded to the top 50 players based upon their point standings.

Pilot TV has special GameDay live expert hosts who comment on the progress of the bingo games, give insights on the football action and interact with bingo players on social media.

New for Vikings Bingo is an enhanced standings feature on Pilot TV where viewers can see the players who are closest to winning the next pattern and where they are playing. This new feature also has a real-time display of the bingo balls as they are called.

B2B gaming supplier Push Gaming has announced the appointment of Jessica Maier as its new chief risk officer in a move that will greatly bolster the company’s plans for continued international expansion.

Gaming Innovation Group and Hard Rock International have agreed to a mutual termination agreement of platform and sportsbook services.