Betano and parent company Kaizen Gaming have made their first North American launch by moving into Ontario. 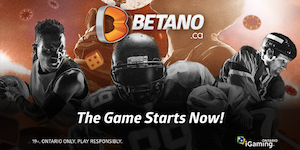 Kaizen also operates the Stoiximan brand and is already established in 12 markets across Europe and Latin America.

Betano has launched in the Canadian province of Ontario during the peak season for American sports, including NFL, NHL and NBA. The launch has also been timed for Canada’s participation in the World Cup in Qatar.

Betano’s portfolio features over 30 sports and more than 1,000 casino games.

Upgaming continues to look up

The team at Upgaming said the 2023 edition of ICE had been a great success and the company was pleased to see the event build on its 2022 edition.