Online slots developer Belatra Games has continued to expand its igaming portfolio with the launch of its new slot, Master of Gold. 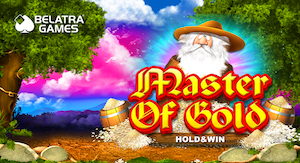 Belatra said its latest release is beautifully crafted and features numerous prize games, bonuses with jackpot draws and a risk game. Players must prize away precious coins from the mysterious Master of Gold, a grey-haired old man who lives on the forest edge.

Free games are earned when uncovering three Master of Gold scatters and the main draw in free spins is the super-symbol which replaces the second, third and fourth reels. Once found it substitutes nine common symbols to boost the chances of “players lining their pockets.”

The Bonus game begins once six or more credit symbols are visible on the reels. Within the bonus is a series of three respins that provide an extra opportunity for the jackpot - grand, midi or mini. Three more re-spins are earned every time one new credit symbol appears and this goes on until no credit symbols show. A mega jackpot is won when credit symbols cover all the reels and the final total is calculated from the display number.

Belatra’s Risk feature adds to the game and is a way for players to earn further coins. They must pick one face-down card from four which doubles the total if higher than the dealer’s open card. Should players correctly choose red, black or suit then the total is multiplied by four.