In an exclusive interview with InterGame, Sega has revealed some of its plans for a North American redemption release and what visitors can expect at this year's IAAPA Expo in November. 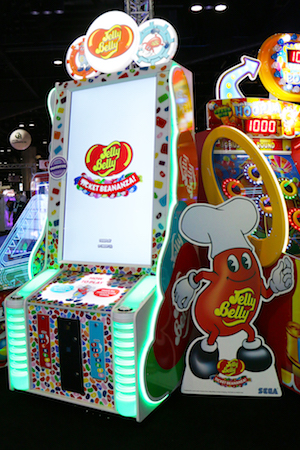 As part of its contribution to a feature on licensed products for InterGame’s June issue, Sega marketing executive, Lester Travasso, spoke about how the company goes about its selection processes for the right IPs and brands.

“With some licences, it’s immediately apparent that they will suit a video game,” said Travasso. “Transformers is an obvious one and when that happens, it makes the process that much easier. Alternatively, we will have an idea for a game and as it develops, it becomes clear that it would suit a certain licence and we start researching what brands or IPs would be the right fit.

“A good example of the latter is Jelly Belly Ticket Beananza video redemption title that we previewed at IAAPA last year. It’s still in development today and we’re looking to bring it to the North American market by the end of this year.”

He continued: “As we were developing it, we came to a certain point where we realised that it would be greatly enhanced by a licence, something that would give it a 'wow' factor. Jelly Belly as a brand has great recognition and awareness and with its colours and family appeal, it was an ideal fit. We’re flexible in terms of which way we go however - if an idea’s on the table and a licence can push it further, then that’s what we’ll do.”

Sega has a long tradition of producing best-selling licensed products over the years famously with Out Run and the Ferrari property. Other notable examples which enjoyed great success were 2008’s Ford Racing and more recently, Transformers. Travasso said: “The original Human Alliance game was really well received and is still operating today, so it made sense to follow it up with Shadows Rising, which has been just as popular. It has really delivered for us.”

As might be expected, Sega is planning further reveals for the showpiece US event at the Orange County Convention Centre and Travasso teased: “We’ve got some big launches planned for the IAAPA Expo this year, one of which will be a big, licensed video game.”

More from Travasso, Sega and a host of other leading contributors will make up an in-depth licensing feature in June’s issue of InterGame. Click here to subscribe.