Major distributor Betson Enterprises is planning some launches at the IAAPA trade show in Orlando, Florida, US, next month. 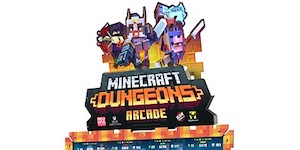 The Minecraft model is one of the best-selling video game franchises in history and is now coming to the arcade sector.

After the successful partnership with Halo: Fireteam Raven, Raw Thrills and Play Mechanix, Betson will bring the Microsoft and Mojang Studios Minecraft game to amusement centres.