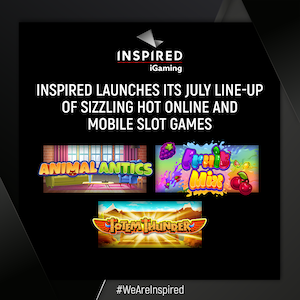 Fruit Mix, as its name suggests, is a fruit-themed slot with simple play features and a reel configuration of 5x3 and 10 win-lines. The wild symbol, shown as a ‘fruit mix’, substitutes all symbols and provides prizes for scatter wins. Four or more of the wilds in view will trigger prizes, up to x500 of the stake. There is a RTP of 94.84 per cent.

The company’s first pet-themed game, Animal Antics, uses Inspired’s unique bonus mechanic with animal symbols. It is an adaptation of the company’s hit Big Spin Bonus. It has 50 win lines and a reel configuration of 6x4. The game will deliver regular base game wins where up to six bonus symbols in the base game will trigger the Big Spins Bonus. This will award between one and five Big Spins using the Pick Me features.

A chosen value sets off the bonus that will run until no Big Spins (a win of x20 or more) remain. During the free spins, sticky wilds build up to accelerate the chance of a big win with the objective of accumulating as many sticky wilds as possible before using up the Big Spins. The game has a RTP of 95 per cent.

Finally, there is Totem Thunder, an online slot with a 5x4 reel configuration and up to 3,087 ways to win. It is packed with wilds depicted as totem ‘heads’. A bonus gives an extra wild on reels two, three and four on every spin. Lightning symbols award players with two extra free spins and if they land on a full stack of wilds on a totem reel an extra row is added. There is a RTP of 95.01 percent.

Claire Osborne, vice president of interactive at Inspired, said: “ “We’re continuing our summer vibes this month, with the launch of three different yet very colourful and fun games. Players will enjoy the simplicity of Fruit Mix, along with its juicy symbols. Packed with wins, Fruit Mix will no doubt attract a breadth of players looking for a fun and easy igaming experience. As new themes for Inspired, Animal Antics and Totem Thunder offer players varying mechanics and gameplay styles. Both games are packed with exciting Bonus features, offering players a chance to bag some nice wins! We look forward to continuing our launch momentum with some great upcoming games throughout the year.”

Blueprint Gaming has returned to one of its most successful franchises ever in the latest imagining of a long-time popular title in Eye of Horus The Golden Tablet Jackpot King.