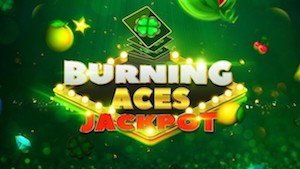 Burning Aces. Jackpot is an online slot hall with a stimulating slot cabinet containing immersive audio-visuals to heighten the player experience. It contains an array of fruit symbols, sevens, clovers, stars and bells, combining to create wins resulting in a fiery display and a surge of coins.

Wild symbols are also available on the second, third and fourth reels, replacing all symbols except scatters, which expands and covers all of the positions on the reels. Scatters form combinations, regardless of where they land, with diamond scatters landing anywhere and star scatters appearing only on the first, third and fifth reels.

The triggering of the jackpot game lifts the entire experience, with four progressives constantly accumulating prizes by a percentage of the wagers placed.

Blueprint Gaming has returned to one of its most successful franchises ever in the latest imagining of a long-time popular title in Eye of Horus The Golden Tablet Jackpot King.