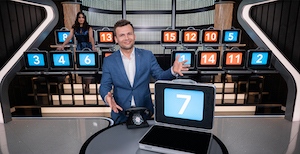 First unveiled at ICE 2019 in February, the new game is available exclusively from Evolution and joins the company’s range of game show-style games.

Based on the hit TV show, Deal or No Deal Live is the world’s first 24/7 game show, allowing players to play anytime, anywhere, on desktop, tablet and smartphone.

In the main game show, contestants predict whether the amount of money in the last of 16 briefcases to be opened will be higher than the banker’s offer. Prior to this they have three offers from the banker, which prompt the live host to ask the all-important question: “Deal or No Deal?”

According to Evolution, the aim was to stay true to the Deal or No Deal TV game show’s format, while also creating an entertaining online live gaming experience for an unlimited number of players.

This involved creating one of most complex studio sets that Evolution has built to date. The end result is that all the familiar elements – including the recognisable studio set, theme music and sound effects for UI actions – recreate the atmosphere of the hit TV show.

Todd Haushalter, Evolution’s chief product officer, said: “Players’ tastes are changing and they are increasingly telling us they love these game show style games, and this game hits the sweet spot since it is the ultimate game show that you can play along with on your phone. We worked really hard to preserve all the drama of the TV show and early signs are that players agree we have done just that.”

Evoplay steps into the jungle with Legend of Kaan

Game development studio Evoplay Entertainment has invited players on a magical quest for undiscovered riches with its latest slot, Legend of Kaan, which will be unveiled at ICE London.