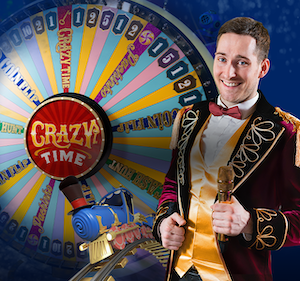 This multi-layered, bonus and multiplier-packed game was first showcased as Evolution’s headliner at ICE 2020 and is the newest addition to the company’s fast-growing game shows category.

Crazy Time has taken a year to develop and it is the most expensive game that Evolution has ever produced.

According to Evolution, the Crazy Time gameplay keeps players entertained with a varied mix of action, entertainment, betting opportunities and a succession of potential multiplier wins.

These elements make the game entertaining in capturing the audience in the same way a TV game show would, with the added excitement of being able to participate in the action.

Todd Haushalter, Evolution’s chief product officer, said: “The goal was to make a game that is so entertaining that people would enjoy just watching it as they would a game show on television. To achieve this, we knew we needed lots of variety and to make the players the contestants on the show.

“The variety comes in the form of copious bonus rounds that bring the players into different side games, all of which are distinctively different and entertaining in their own right. We know this game will appeal to slot players and we wanted to really entertain them and to do that we packed each game round with lots of action, also making it longer than a typical slot-round. We feel players get great entertainment value with each bet in this game.”

iSoftBet, the leading online and mobile casino content provider, takes players on an epic adventure with its latest innovative slot, Book of Sheba.