Blueprint Gaming has launched its latest foray into the gold rush with the new entry in its prospector-themed game series, Gold Strike Bonanza: Fortune Play. 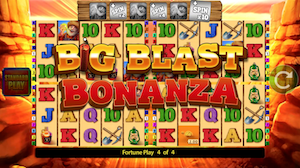 Once more highlighting its strengths in identifying and evolving popular themes and titles to new heights, Blueprint has introduced its successful Fortune Play mechanic - inspired by the free spins round of the previous game - which allows for play across four reel sets simultaneously.

The hardy prospector is back to guide players into the hills to seek their fortune, with the hunt beginning if three or more bonus symbols land, triggering the free spins round.

From there, if the prospector makes an appearance, he acts as a wild and the game pays a win for every golden nugget that appears on the same spin.

If four Prospector symbols are collected during free spins then extra spins are awarded, with a scatter win multiplier being activated if further gold nuggets are discovered.

The win potential and gameplay are ramped up to frenzied levels when the player-favourite Fortune Play is initiated at a cost of 20x the bet.

This unlocks four separate windows where the number of Prospectors needed to upgrade the scatter win multiplier is reduced, as well as awarding an extra Fortune Play.

All the cheerful animation, ambient soundtrack and effects of the previous games are back as the prospector celebrates every success with the player, creating an exuberant gameplay experience for those enjoying a return to the series and newcomers alike.