Blue Guru Games will release its Legendary Battle of the Nian slot on January 31. 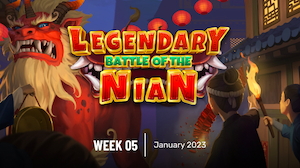 The game maintains the studio’s practice of drawing inspiration from folklore myths and is therefore based on Chinese New Year.

Legendary Battle of the Nian features cascading symbols that can create long chains of wins, as well as a Free Games feature with upgradable symbol positions and a Buy Feature option.

Three firecracker scatters will trigger 15 free games, during which a all positions on which a scatter lands get upgraded from basic to bronze, bronze to silver and silver to gold.

Upgrading positions raises the multipliers on them, which affects the final wins that are calculated.

Legendary Battle of the Nian’s maximum multiplier is worth 5,965x a player’s bet and the Free Games feature can be bought for 60x a wager.

BetConstruct will offer insights into the behaviour and preferences of partners’ players through its new Dataspot product.

Fire Archer is the latest slot release from Pragmatic Play and is a fresh take on the Sherwood Forest fables.