Yggdrasil, a leading worldwide publisher of online gambling content, and Bang Bang Games have reunited for the feature-filled sequel to Super Cash Drop. 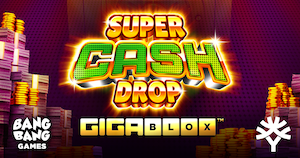 Base play gives players a 6x4 grid, with 40 paylines, as well as a guaranteed GigaBlox symbol on every spin, with a minimum size of 2x2.

On any spin, the reels can expand in height to up to 6x6, adding more paylines as well as enhancing the potential height of a GigaBlox symbol to fill the entire reel.

Super Stretch Wilds can also land, replacing all symbols on a single reel with wilds. If more than one lands, a win multiplier is also activated to enhance the chances of a big win.

These can remain sticky through locked wilds, which will trigger a respin. This can continue if more wilds land on the repsin, until either the entire matrix is filled or an unsuccessful spin occurs.

The Super Free Spins is triggered when five or more bonus symbols land. During this mode, all spins are played on the maximum reel size of 6x6, while all low paying symbols are removed.

Each wild that lands is a locked wild, remaining sticky, while respins can also occur, as with the same mode in base play. Players can also gain an extra free spin by landing a scatter symbol, with no upper limit.

In markets that allow it, players can also progress straight to free spins by purchasing it for 75x their stake.