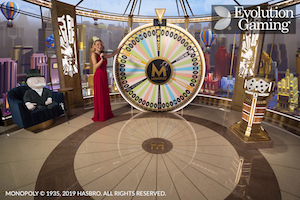 The new game, first unveiled at ICE 2019 in February, is available only from Evolution and extends the company’s range of game show-style games.

Monopoly Live is an all-new special edition of Evolution’s Dream Catcher money wheel, in which the world’s most popular board game meets live casino – complete with augmented reality, 3D bonus rounds built around the adventures of Mr Monopoly, and with the chance of big “multiplier” wins.

Todd Haushalter, Evolution’s chief product officer, said: “It is a real honour to work with one of the world’s best-loved brands to create such a unique game. Monopoly Live represents a real breakthrough in our industry and redefines live casino entertainment.

“Dream Catcher has been loved by players ever since its launch in 2017 and we are very excited for the launch of this special Monopoly Live edition of Dream Catcher. A game like this has never been created before and it leverages some of the most advanced technology available including the use of augmented reality.

"Our emphasis was on creating an immensely fun game for players and we are confident that it offers players a truly unique gaming experience with the combination of the main money wheel game, the live host and exciting Bonus rounds with Mr Monopoly in his 3D Monopoly world, complete with all the familiar Monopoly game elements.”