EveryMatrix has announced a major contribution to Foundation Conservation Carpathia, which aims to protect the Carpathian mountains from deforestation and create a wilderness reserve in Romania. 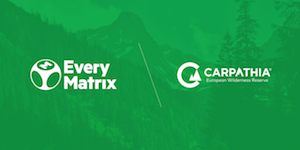 The igaming software provider is joining a large initiative to actively preserve the forests of the Romanian mountains. The company donated €50,000 to Foundation Conservation Carpathia, which will use the donation to conserve, restore and protect the wildlife of the region.

In 2005, Romania restituted many formerly nationalised forests to private owners, leading to massive deforestation. Since then, the country has lost thousands of hectares of Carpathian forests, which poses a severe threat to the integrity of the ecosystem.

Established in 2009 by a group of 12 philanthropists and conservationists, FFC's mission is to return the land ownership to the state in the form of a national park. Through this effort, the foundation aims to acquire land, stop illegal logging, mass deforestation and preserve the virgin lands for future generations.

Ebbe Groes, group CEO of EveryMatrix, comments: “The current situation in Romania saddens me because we’re rapidly losing the very ground and wilderness that nurtured us. My native Denmark has a European record low areas of undisturbed nature left.

"Let’s not repeat that mistake with the wonderful wilderness of Romania. The Carpathia European Wilderness Reserve’s ongoing battle is a step in the right direction which EveryMatrix is happy to support actively with financial funds and knowledge transfer.”