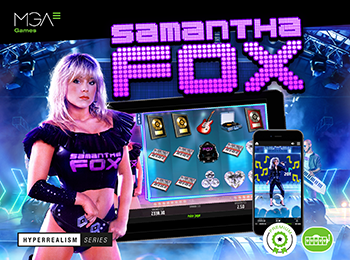 Samantha Fox, the world-famous English singer, actress and model is the protagonist and gives her name to the latest online slot by MGA Games.

The company specialising in the development of online casino premium productions has chosen the international star to elevate its Hyperrealism Series, the range of slots that stand out for the popularity of its characters, as well as for the quality of its graphics and hyperrealism of the images.

The sweeping influence of the Samantha Fox phenomenon in the 80s remains unaltered today in the memory of thousands of fans. Her song Touch Me launched her to the top positions in UK and the US and she was number one in 17 countries, achieving a total of 24 platinum, gold and silver records.

The latest creation by MGA Games is a tribute to the famous singer. Samantha Fox includes four mini-games that relive the career of the sex symbol with photoshoots, recording studio, concerts and autograph signing.

Affilka by SOFTSWISS recently announced that it surpassed a milestone of 100 brands launched on the affiliate marketing platform.