Visitors to January’s EAG show in London will be able to experience the global launch of the latest generation of one of the most successful video game series, Time Crisis 5. 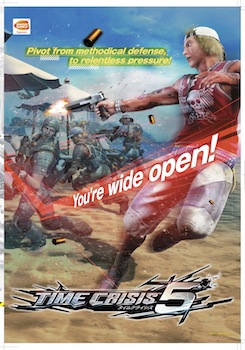 The Time Crisis series began in 1996 with the original arcade game, while the last title, Time Crisis 4, was released in 2006.

“We have many customers who are still running Time Crisis games in their arcades than can be up to 10 years old – the players love them that much,” said John Brennan, commercial director at Bandai Namco Amusement Europe.

Time Crisis 5 differs from its predecessors with the addition of left and right foot pedals, which allow players to seize advantageous positions in order to gain the upper hand on their enemies. Players can release the pedals in order to hide and can also cooperate with another player in two-player mode.

The cabinet boasts two 55ins monitors, a newly designed handgun and recoil mechanism. The game features three stages – Rampage in the Resort, Assault Helicopter and a high-speed battle on motorcycles. The arcade game also supports Bandai Namco’s Bana Passport for players wishing to save their progress.

“Arcades have waited a long time for this game, we expect a massive response at EAG,” said Brennan.

EAG International is taking place at ExCeL in London on January 13-15.