Galaxy gets extension to Macau licence

Hong Kong-based Galaxy Entertainment Group has announced that its Macau licence, due to expire on June 26, has been extended for a further period up to December 31 of this year. 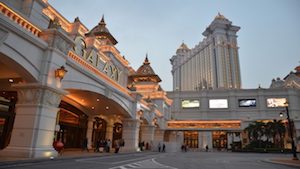 This will bring the licence in line with those of other concessions in the territory, with all of the licences due to be re-issued following a tendering process after that.

Galaxy has to pay HK$45.63m (€5.5m) within three months of the issuing of the new extension as a premium.