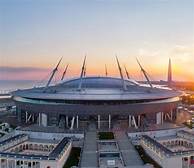 The stadium will be one of those hosting the 2021 Euro Football Championship, so it must satisfy the strict security regulations laid down by FIFA, UEFA and ESSMA.

The club opted for a solution from Dallmeier because of its patented Panomera multifocal sensor that guarantees security at many global locations.

The system covers the stadium itself, entrance gate approaches, rooms below the grandstands and the stands themselves in one of the largest video security projects ever undertaken in a football stadium. One requirement that was essential was to meet the challenge of capturing all areas of all the grandstands all of the time, so that unequivocal identification of offenders could be assured. The Russian Interior Ministry had stipulated two key requirements for the system: it had to capture the entire grandstand with minimum resolution density of 250 pixels per metre and the image frequency must not fall below a frame rate of 25 frames per second.

The Panomera system satisfied all of the criteria but was secured only after a number of different systems had been presented to the security managers at the club’s former ground, the Petrovsky Stadium.

The Dallmeier Panomera includes many aspects of technical superiority and came with innovative 3D planning in which a digital reproduction of the Gazprom Arena was created.

Today over 1,000 single-sensor cameras are installed in the arena in addition to the Panomera systems.

Severe restrictions have been placed upon Crown’s Metropol Melbourne casino by the state of Victoria, Australia, through the pandemic.

South Africa’s decision to reopen its borders to all visitors has been welcomed by the hospitality chief at casino chain Sun International.

The $150m refurbishment of the Bon-Ton department store at Westmoreland Mall, Pennsylvania, US, into a casino has been completed.