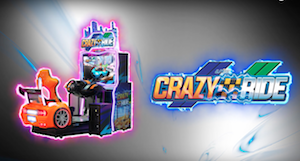 The game sees players picking up various passengers on a brightly-coloured city map and delivering them to their destination before the timer runs out.

Several vehicles and drivers are available to choose from, which the player can use to hit ramps and use nitro boosts to achieve big air.

A 43ins monitor features on the cabinet that has a motion platform and a built-in fan that blows air at players as they drive. Interestingly, the dashboard of the cabinet has a 7ins touch-screen ‘satnav’, which further lends an Uber-feel to the gameplay. Up to eight players can compete together in online play.

There’s has been no official announcement of the game on UNIS’ website, so the features and gameplay could well change in due course, but the game looks to be in the latter stages of development.

The IAAPA Expo in November will no doubt reveal more.