A new arcade game from Bandai Namco, licensing the Nintendo character, Kirby, will soon be released in Japan. 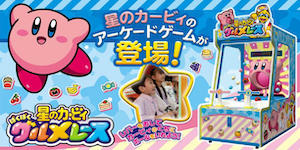 No official release date has been announced, but a short video is available showing gameplay on Bandai Namco's official YouTube channel.