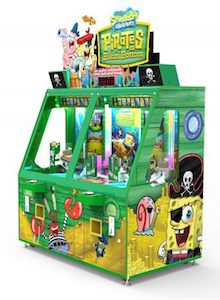 Chips are RFID tagged and the cabinet is equipped with two validators to redeem the tickets.

Players are tasked with shooting balls into a moving treasure chest. A successful shot triggers a video sequence and adds a bubble to the bubble meter. After 10 successful shots the bubble meter is full and the pirate prize wheel spins on the display, offering prizes including bonus tickets, cards, chips and balls, as well as the 500-ticket Big Win dividend.

Andamiro USA president Drew Maniscalco said: “The key to a successful SpongeBob adaptation, however, is the game itself must be compelling on its own and we believe Pirates of Bikini Bottom is the most innovative pusher-style concept to hit the market.”