World of Rides returns with Falgas

UK manufacturer of children's leisure vehicles, World of Rides has re-commenced distribution of kiddie rides via a deal struck with long-time Spanish purveyors of the craft, Falgas. 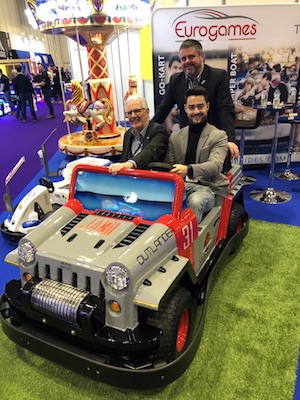 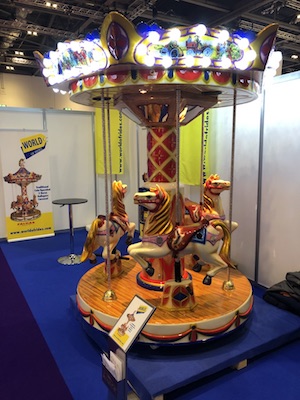 UK manufacturer of children's leisure vehicles, World of Rides has re-commenced distribution of kiddie rides via a deal struck with long-time Spanish purveyors of the craft, Falgas.

General manager, David Robinson revealed: “We’ve come back into kiddie rides again because our customers are expanding, especially in farm parks. As such, we’ve taken over the Falgas distribution in the UK.” It’s the latest in the company’s partnerships with Italian manufacturer Eurogames also sharing space with Robinson on his stand.

On his stand Robinson had a traditional three-horse carousel (pictured). “It’s the only galloper kiddie ride in production, all others simply spin round while this obviously goes up and down as well. It’s a nice piece. While not brand new, it has been updated and is back in the UK for the first time in a while.

“It’s a timeless product that has been updated for modern operation with LED lights, a new design, and importantly is cashless compatible.”

Of the company’s main product offerings, the 24v Off Road Outlander was also on display.  “It’s a robust vehicle which will take two adults. It has full suspension, interior dashboard, lights, indicators, horn and a reverse gear. It’s perfect for use as a driving school car. It even has agricultural pneumatic tyres for use on short cut grass and flat, unmade roads. We’ve taken lots of summer orders for Easter production, it’s proving very popular.

Complimenting his other products, Robinson also highlighted the company’s Laser bumper cars. “Riders can fire lasers at each other. Once they hit the targets on another car, it will stop and spin 360 degrees before the driver can regain control. It’s great fun and people are looking to buy fun.”