A new movie for Triotech’s VR interactive Storm coin-operated simulator has been released by the Canada-based company. 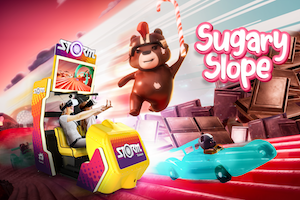 Available at no cost to operators of existing and future units, Sugary Slope is an addition to Triotech’s content library that will expand its characteristics.

The interactive adventure takes players into an all-action, competitive race in a world of confectionary, lollipops and chocolate-spouting geysers, giving a wide appeal to all members of the family.

Ernest Yate, CEO, said: “We have always focused on creating fun for all ages. We are developing a content library with a wide appeal, just as we did for our other attractions, because that wide appeal is what increases revenues for operators.”

The Storm is an unattended multiplayer interactive VR coin-operated ride, using motion capture technology to eliminate the need for players to touch components or controls. Players interact by simply waving their hands.