Triotech’s European Division has won the Park World Excellence Award for the best dark ride or media-based experience in 2021. 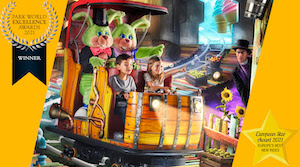 The award relates to Triotech’s Underlandet attraction, at the Liseberg theme park in Sweden, and was won in conjunction with Gosetto, P&P Projects and Lifeformations.

The key element to the preshow was the Dynamic Explorer, which the Tritech Europe CL Corp delivered – an immersive motion cabin taking visitors into an underground journey.

Deborah Attal, managing director for theme parks in Europe at Triotech, said: “Our ultimate goal was to create the illusion of moving down underground so that visitors are 100 per cent immersed in the story from the first second in the experience.”