InterGame caught up with manufacturer TouchMagix recently for an update on the reaction to its trio of new redemption games unveiled at IAAPA last November. 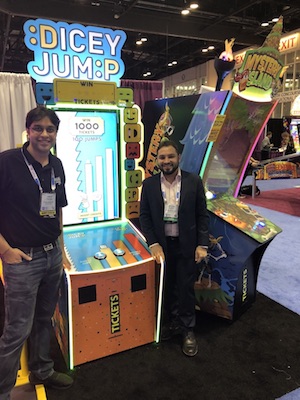 Reflecting on the company’s success at the show, CEO Jayesh Kariya said: “It was the busiest show in the last four years for us. Over the four days we had online vloggers and press playing and testing the games and they were very well received. They told us they were some of the best games they’d seen on the floor.”

Kariya also revealed some of the ways that the games had been tested prior to their unveiling. “Dicey jump has so far proved a very popular and addictive game with a high repeat value. It was tested with 100 adults and we gave them a choice between either playing the game or having a beer and 72 of them chose the game!

“Among children, Hop ‘N’ Stack was chosen 82 times over an ice cream. It’s a system we use to analyse a game’s popularity within different demographics. While they’re all designed for different age groups, they’ve all proved popular across the age ranges, so its great to see.”

“They’ve got great gameplay, small footprints and are priced attractively so we’re sure that operators are going to love it. In fact, we secured many sales at the show and the numbers since then have been fantastic,” commented Kariya

The other new title on display in Orlando was Mystery Island which is an industry first mixed reality game. Kariya said: “It has familiar gameplay, but uses wholly new technology with a rotating display that creates a unique, immersive experience.

“The game involves a pirate trying to get to the top of a mountain, jumping over obstacles on his way. Each time the game is played however, the layout of the obstacles change, so it’s a different challenge every time that encourages repeat play. There are two levels, beginner and expert with different ticket payouts for each.”

Pictured on their booth at IAAPA are (L-R) founder Anup Tapadia and CEO Jayesh Kariya.