The 40th Timezone FEC in India is to open before the end of the year, according to parent company The Entertainment and Edutainment Group. 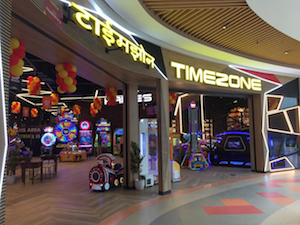 The 36th Timezone in India opened at the end of September in Nagpur at the Trillium Mall and was an instant hit with the locals. It has 9,000sq.ft of entertainment.

Four more Timezones are in the works and should be open before the end of the year. Like most of its fellows, the Nagpur Timezone has bowling, virtual reality, bumper cars and many games, notably redemption, with an extensive prize shop.

TEEG is the largest operator in India and throughout the Asia Pacific region. It is jointly owned by Quadrant Private Equity and the LAI Group. Overall, Timezone now has 300 locations and is headquartered in Singapore.