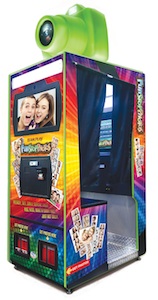 “We are very excited to be recognised by Mitsubishi with this award,“ said Frank Pellegrini, CMO and president of Team Play.