A new FEC in Canada will be inaugurated by one of the country’s most famous racing drivers, Alex Tagliani. 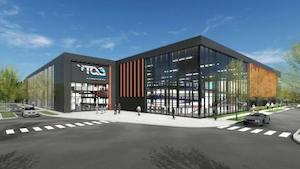 In spring, 2021, a new TAG e-karting and amusement centre will open at Sainte-Thérèse, Quebec. It will contain nine high technology attractions. There will be three karting tracks, a laser tag arena, six axe-throwing lanes, six bowling lanes, a Triotech 7D interactive cinema, interactive trampolines, a VR experience and many arcade games plus a climbing wall.

The karting tracks will consist of one for adults, one for children and a super track combining the two in a half-kilometre length. There will be six course choices, each of which can be completed clockwise or counter-clockwise. The karts are imported from Italy and are 100 per cent electric.

The cars will feature digital steering wheels, bumper-integrated sensors for safety and a boost button for acceleration.

Tagliani said: “I think of all the young people and thrill seekers who want to let off steam and get their adrenaline flowing. The TAG centre will be the new generation recreational centre for choice; an exhilarating place for an outing and as the first multi-level electric karting centre in Canada. I see it as a springboard to eventually develop talents that will shape the future Quebec karting champions.”

The location will cover 65,000 sq.ft of a new building in Plaza Sainte-Thérèse, which is currently undergoing a major make-over by the MACH Group. The location is an $18m investment between Tagliani and a number of partners.

The venue will have between 75 and 100 employees and will boast two restaurants including a resto-bar, with banqueting space.