The Euro Attractions Show 2017 opened in the Messe Berlin Exhibition Centre, Germany, this morning and will run until Thursday, September 28. 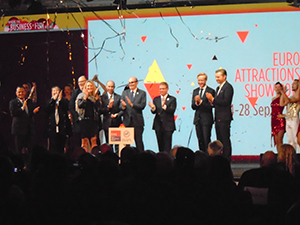 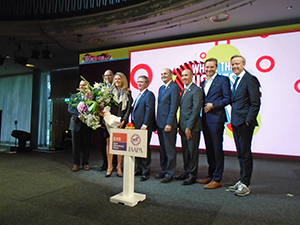 More than 11,000 amusement industry professionals from 119 countries are expected to attend the show during its three-day run.

During the opening ceremony, Greg Hale, chairman of IAAPA’s board of directors, said: “It’s fantastic to be back. EAS is one of the only places where the entire industry comes together. Even though we are all competitors it’s always great to see everyone. I’m not sure many industries can say that.”

He said that we are starting to see a number of different technologies being incorporated together for the first time, virtual reality being a prime example of this, and that this combination of formats is the trend to look out for at this year’s show and in the future.

Berlin, he explained, was chosen as the host for this year’s show because it is “central, easy to get to and has a wide range of amusement parks.”

“Taking EAS to Berlin for the second time will provide value to all attendees regardless of their background in the leisure and attractions industry. Some of the best in the leisure industry are located in Germany and the strong reputation of the Berlin-Brandenburg region in hospitality and business makes it an ideal location for EAS,” said Karen Staley, senior vice president of IAAPA Europe, Middle East and Africa.

First vice president, Andreas Anderson, added: “IAAPA has been supporting EAS since 2001. Today we represent over 1,400 European members. We want to give policymakers a clear idea about what matters in our industry.”

He said that he is excited about the industry’s future, particularly because digital technology is having a “transformative impact on the way we market our products and interact with our guests.”

The show will include more than 20 educational seminars designed to promote progressive thinking and act as a networking platform.