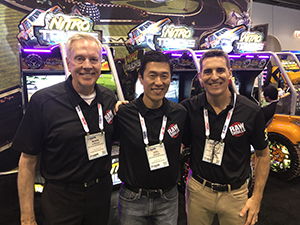 The virtually complete off-road truck racing title is packaged in a cabinet with a roll cage, 5.1 surround-sound, dynamic lighting, force-feedback steering wheel and a camera to display player’s faces as they play.

“We only saw the cabinets four days ago,” Play Mechnanix’s George Petro said. “It’s fantastic to see the results. You see the smiles of people playing and hear their laughing and excitement and you know you’ve done a good job.

Petro’s colleague, manager of software development Joel Seider, said: “Shipping is likely to be in early February, once we’ve undertaken a few tweaks that we want to make to the cabinet and software, but what is on display here on Betson’s booth is largely what operators will be receiving.”

Unlike some arcade racers, Nitro Trucks features real-world driving physics in an attempt to add an extra dimension to the gameplay. “It’s a skill-based video,” said Betson’s Tom Kane. “In typical Raw Thrills fashion, it allows for the casual player to have a degree of success but also for the more dedicated player will be able to get satisfaction with the way that the difficulty curve scales.”

Supplied in single units, up to eight can be linked together for competitive play. No construction is required other than the headers.

“Potentially interactive, it’s going to be a good size footprint, hitting that sweet spot along the lines of Halo two-player, Jurassic Park and The Walking Dead.”