A report on the impact of the pandemic on the entertainment industry has been compiled by debit card management systems company Sacoa. 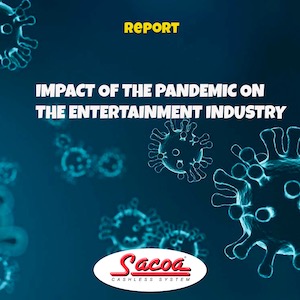 The company surveyed operators from different countries to draw up a picture of the impact of COVID- 19 on the industry with the objective of providing the industry with background that will be of interest and useful to make decisions relating to the pandemic.

The report was returned by 28.9 percent arcade operators, 40.8 percent FEC, 21.1 percent theme park and the rest split between trampoline parks, bowling, amusement park and ‘other’. Geographically, 25 percent were in North America, 5.3 percent in Asia, 2.6 percent in Europe, 55.3 South America and Caribbean, 3.9 Oceania and 7.9 Africa.

Most, nearly three-quarters reported that they had protocols for safety and hygiene in place, with nearly half saying that they had developed their own protocols. Online sales for the majority of respondents either did not start until the lockdown began or still don’t have it and most believe that they will not experience more online sales as a result of the pandemic.

Workforces will be cut up to 70 per cent by one-third of respondents, up to half by 21 per cent and only 16 per cent are not reducing staffing.