The promoter of the Korea International Exhibition and Convention Centre, South Korea’s largest exhibition centre, is considering asking the national government for the right to site a casino at the venue, according to GGRAsia. 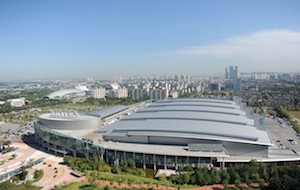 Currently, only one of South Korea’s casinos - Kangwon Land - is able to serve local players. The rest are foreigner-only establishments.

KINTEX is run by KINTEX Inc, a firm originally specialising in making industrial materials. The complex is in the north-west of the capital Seoul’s metropolitan area.

According to a KINTEX Inc representative, the centre is interested in establishing a third zone at the site and this would include the hotels and possibly a casino. T

The KINTEX Inc representative also told GGRAsia that the company had first considered in 2009 applying to add a casino, following an associated business proposal from US-based leisure resort owner Central Florida Investments, but the idea did not go forward.