In what is widely regarded as positive news by local observers, it has emerged that the MGM-Orix consortium is proposing a US$9.1bn investment level for its Osaka Yumeshima IR. 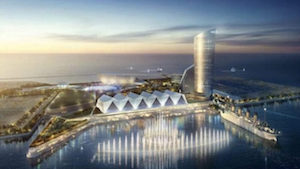 While this investment level is less than the US$10bn that had been thrown around a couple years ago by then-competitors such as Las Vegas Sands and Melco Resorts, many had feared that changing conditions in the Covid era might lead to a much lower figure.

In terms of the timeline for opening, however, it has now been pushed back even further, with the proposal suggesting that business operations may commence sometime between 2028 and 2030.

This is the first indication ever that an IR development in Japan’s first round might not have its opening in the 2020s. The new plans apparently call for opening the Osaka IR in stages.

Included in the proposal is the consortium’s agreement with the local government’s demand that it bear Y20bn in costs for infrastructure improvement, in particular the extension of the Osaka Subway to Yumeshima island.

Earlier indications from company leaders were that both MGM and Orix would become equal partners, each with about a 40 per cent stake in the consortium. Other local companies, yet to be revealed, are expected to fill out the final 20 per cent.

The principally-gambling Enada trade show, set for Rimini in Italy (September 21-23), has had a series of precautions put into place for visitors to the venue, the Rimini Expo Centre.

TCS John Huxley has been chosen to supply a whole host of its latest live gaming equipment at Hollywood Casino York in Pennsylvania, Penn National Gaming’s newest casino that is set to open on August 12.