Thousands of workers in the Italian casino and amusement arcade industry demonstrated in Rome and Milan yesterday. 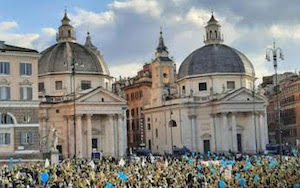 They were protesting at the lockdown that is affecting up to 150,000 people who work directly, or indirectly, in the amusement arcade and gaming industry.

They marched through the Piaza del Duomo in Milan and the Piazza deal Popolo (pictured) in Rome, to draw attention to the plight of their industries.

They demanded the immediate reopening of the entertainment locations, while fully implementing the country’s health and safety protocols. They also called for talks between the government, trade unions and trade associations.

Richmond in the US state of Virginia has been presented with six casino development plans and the public will now begin having their say as to which proposal is best.

Spain’s principal show, the amusement and AWP games orientated FIJMA, set for Madrid on April 13-15, has been postponed until March 15-17, 2022.

Steelwork is the main subject of activity and the field of competence of EGT Steel Production.