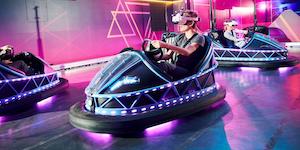 The device is operating in Denmark, Germany, the Ukraine and at several Sala Entertainment FECs in Saudi Arabia.

Italy’s IE Park has sent a set of its Soli bumper cars fitted with SPREE VR headsets into the Sala operation in Riyadh.

The SPREE Cyberblaster is created by the company in conjunction with VFX studio Pixomondo and asks riders to work together in an action-packed game while driving.

The system uses IE Park cars and tracks with infrastructure from SPREE, licensed by VR Coaster.

SPREE reported at the IAAPA show earlier this month that it was experiencing a sharp upturn in demand for its VR products since the lockdown was eased.

It has sold 40 of its VR attractions, comprising the ten VR bumper car systems and 30 SPREE Arenas - numbers it hopes to double in 2022.