Gauselmann subsidiary Betcom is building on the success of its rapidly expanding games portfolio to show its most diversified range to date at the EAG show this month in London, UK. 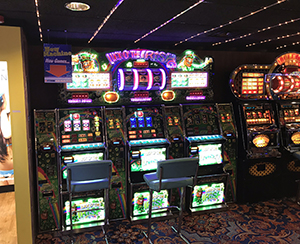 Luck of the Irish – Over the Rainbow has been in full production runs since October’s ACOS and significant numbers have been placed within the UK’s largest AGC operator and Betcom’s sister company, Praesepe.

“We tested Luck of the Irish – Over the Rainbow extensively and this led to two substantial injections of the product into sites in the latter part of 2018,” said Andy Tipple, head of product at Praesepe. “We needed to remove some of the old legacy analogue three-players in our estate and having a new analogue product that has a similar game profile was just what we needed. The fact that it can more than match the income and is fully supported as well as being offered in both TITO or cash is the icing on the cake.”

“The support both in terms of R&D and in orders from Praesepe has really propelled Betcom forward over the last 12 months,” said Simon McCarthy, managing director of Betcom. “We are looking towards EAG and the rest of 2019 with great anticipation as we have our widest ever range of proven product, as well as some exciting new developments which are already performing extremely well in site testing.”

These include Casino Crazy a hi-tech Cat C analogue game, which is already in production having secured significant retailer approvals.

Visitors to stand 540 at EAG will also see the hi-tech Category D titles Wish Upon A Jackpot and King Kong Cash and the lo-tech King Kong Cash three-player with its attractive top reel feature.

Finally, the eye-catching lo-tech single player Genie Jackpots community game for AGCs and bingo will also be shown at EAG and is full of Eastern promise.